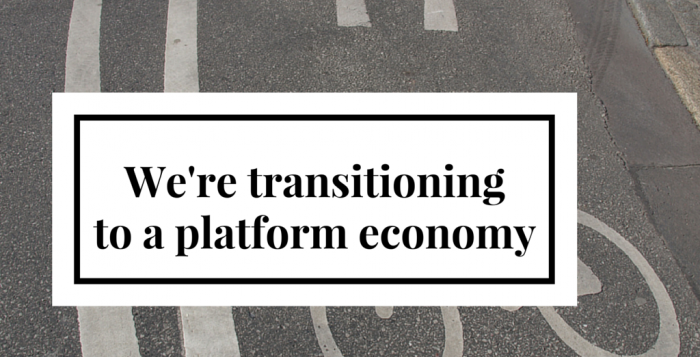 If I would have told you in 2008 that a businessman would build a hotel chain with about 1.5 million rooms in roughly 34,000 cities in over 190 different countries in just eight short years, you would have laughed in my face. Consequently, you would have listed for me all the impossibilities one would face in building such an empire with limited capital in so short a time. However, this is exactly what Brian Chesky and Joe Gebbia proved themselves capable of. Not by building all this on their own, but by facilitating others to conveniently rent out their existent real estate to complete strangers.

Airbnb embodies, together with, for example, Uber, Lendingclub and the Dutch 3D hubs, Peerby and SnappCar, the unprecedented opportunities of exponential growth in the platform economy. Platforms on which the supply and demand of items, knowledge, money, and labor meet, learn to trust each other, and finally perform a transaction. The keyword in this development is facilitation. To facilitate others in creating value and making use of existing and unexploited knowledge and assets.

Personally, I believe that every form of organization, without exception, will be influenced by this new platform of development, also referred to as collaborative economy, within the next ten years. This belief caused me to travel all over the world for the last three years, to visit and speak with over 300 businessmen and experts in this industry. Through this process I learned to understand what is going on, what their dilemmas are, and what several future scenarios might look like. What follows is a brief analysis.

Frustration and amazement as sources of inspiration

The parents of Danae Ringelmann, crowdfunding platform Indiegogo’s co-founder, were as businesspeople never able to make the next step. Reason: they lacked access to growth capital. This frustration planted the seed of Indiegogo. Its goal: democratization of the access to capital, so that everyone would be able to finance what is important to him or her, regardless of what it is. Finding no affordable transport, while thousands of empty passenger seats speed down the highway, and a high transaction cost for transferring money internationally, were the frustrations that laid the foundation of respectively BlaBlaCar and Transferwise, both ‘unicorns’ on European soil. Besides being an accelerator of innovation, frustration also leads to a higher purpose. A higher purpose in giving everyone in the workplace direction.

“If you’re not ashamed of your first version, you went live too late”, is a well-known quote in the startup scene. Platform organizations are characterized by a fast learning curve and close contact with their users. Whoever thinks “doing” equals charging full speed ahead is mistaken. It strikes me time and again how well startups and scaleups keep their focus and resist this temptation. Recently, I asked Frédéric Mazzella, founder of ridesharing platform BlaBlaCar, if he would be open to delivering packages or implementing Uber-like activity. It would only be a small step and makes for an interesting business case. His answer was, “No. First we’re aiming to become the best ‘ridesharing service’ in the world. After that, we’ll see.”

For existing companies it’s hard to confine or predict these startups. Often, they aren’t the usual suspects and therefore it is difficult to know where they might surface from. About three years ago, I asked a bank director of one of the Netherland’s largest banks if he had heard of Transferwise. “No,” was his answer. He had never heard of –what still was– a startup in international money transferring. Now, I do understand it’s impossible to monitor the whole world, yet when a new player, however small, arises in your industry, is built by the people who built Skype and PayPal, and is being funded by Richard Branson, I would at least prefer to know of its existence. Meanwhile, I read recently that Transferwise is ‘shipping’ 500 million British pound a month through their platform now. I forwarded the link to the respective director. He should know of them by now. Saying it is hard to monitor the market is no excuse for creating a system that signals certain indicators. The positive message for existent organizations is that if others can think outside the box, you could do it as well. Ask yourself the question, ‘What am I?’. And you’ll see, there are more possibilities than you thought.

Although the landscape of platforms is presently formed by new companies, my forecast is that existing companies will join the movement in the near future. Existing companies have something of a leg up on a startup, namely a client base. Social media organizations like Google and Facebook are already experimenting with initiatives in the sharing economy. They have a certain critical mass and are already part of their users ‘routine’. However, also less likely organizations can make great strides. It strikes me how existing organizations present their legacy as a handicap, instead of their advantage. Change your perspective and you’ll be amazed by all the possibilities. As a corporation, you will present a far more attractive partner for energetic startups. Start looking for bridge-builders within your own ranks, those who know the pros and cons of both worlds, and make the connection from that point.

The platform economy is developing rapidly, though the race isn’t over yet. We’re in the middle of the transition, and though figures of growth may be impressive, the current greatest examples are far from perfect. Issues regarding ownership, (reputation) data, responsibilities of platforms, exclusion, and raison d’être, will probably be fueling public debate in the near future. Meanwhile, developments regarding blockchain are at the verge of a breakthrough with the goal to decentralize the constructed central power of these platforms. Where are we headed? God only knows. The only way to find out is by doing. Will you join the ‘expedition’?