CLOSE
Home Project updates How Estonia became the most digital country in the world. 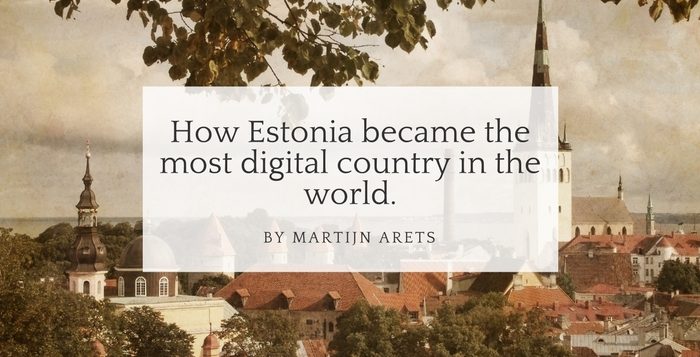 Agile processes, Minimal Viable Product, speeding up and embracing uncertainty. These are the words you mostly hear in IT-company’s offices, but this time they’re uttered by Estonian government officials. The government of Estonia is very digitally engaged and open. Late 2014 they made their country available for the rest of the world. The government wants to grant everyone on earth a digital identity and excess to the ICT-infrastructure of their country through project e-Residency.

E-Estiona’s story starts with the collapse of the Soviet Union and its independence in 1991. At that time the country faces two challenges. Firstly, the leadership of the country, with just over one million inhabitants, recognizes their obscurity. This makes their state vulnerable. To become known, the country has to stand out. To use marketing terms: Estonia needs a Unique Selling Point (USP).

The second challenge is the establishment of a whole new governmental apparatus for relatively small number of in inhabitants. A traditional approach would be unaffordable for the government. There must be another way to organize this.

The answer to both questions became: ICT.

However budgets are limited, the Estonians do have one great advantage: they can start with a clean slate. So, the government is building a basic platform on which al ICT-infrastructure might be connected. Data for a new ICT-project will be retrieved from this source which prevents for duplications. Inhabitants receive an ID-card with a chip which, in combinations with a pin code and an USB-reader, forms the digital identity of the inhabitant. Once logged into the system the inhabitant has access to all his data. And he is able to see who has seen his data. The majority of violations of e.g. curious doctors or officials will be discovered by the inhabitants themselves.

Thanks to this approach, 97% of all schools are online in 1997 and the government has constructed a free WiFi network in all inhabited areas in 2002. Since 2007, it is possible to vote digitally, and by 2017 the average Estonian takes only three minutes to complete his tax declarations. That 71% of Estonia’s GDP originates from services might have to do with it. All this is facilitated by the safest, privacy friendliest system ever build by a government.

All this has put Estonia high on several international lists:

E-Residency Managing Director, Kaspar Korjus: “In digitalization, most often you find processes being digital, though finally something has to be signed on paper. Not here, as even new laws have to be signed digitally. I can’t remember myself going into a voting booth anymore, everything here works digitally.”

That the approach is bringing forth its fruit is described by journalist Jeremy Epstein and Shai Franklin in their article ‘How Estonia can save Western civilisation’: “The investment in infrastructure has not only reduced government expenditures by the equivalent of 2 percent of gross domestic product (GDP) (500 million dollar), it has also given rise to one of the world’s most entrepreneurial and innovative countries, with the second-largest number of startups per capita.

In December 2014, an idea is launched by the ‘governmental startup project’, which states that not only Estonian inhabitants, but everyone in the world, may use the country’s infrastructure. The literal goal is to give every person on earth a digital identity. The advantage for Estonia is that the country becomes well-known and it stimulates the economy.

Korjus tells how that project is handled: “We like to keep things simple and do not directly think in terms of end products. For the idea of e-Residency we created a page on Launchbase: a platform to share your idea briefly and where people can subscribe to be kept up to date. When the managing director woke up the next morning, 4.000 persons from 150 countries had already subscribed. It was beyond doubt, we had to continue with this plan.”

“We developed the idea, and build a Minimal Viable Product. Therefore we had to change some laws. By working with a dedicated team ánd with the support of the government it worked to set out with this plan within a few months. None of this would have been possible without a total commitment to technology and innovation by both the public and private sectors in Estonia.”

Through the website, every non-Estonian of 18 years and above can request an e-Residency. Against the cost of 100 Euro, you are able to pick up your card an code from over 200 locations worldwide. The Physical contact moment (don’t forget your passport!) is the moment the link between your physical and digital identity is made.

With your card and pin code you’re granted access to Estonia’s user interface and you’ll receive a digital authorization tool. Besides this, anyone on earth can acquire access to European payment providers. And you may, wherever you are on the world, start your company digitally. Korjus: “The e-Residency could give financial and technological inclusion to 73 percent of world’s population excluded from financial tools.”

Jeremy Epstein and Shai Franklin: “With e-Residency individuals can start their own company within the European Union within 24 hours, open an European bank account, and subscribe digital documents to be accepted within Europe and beyond.”

New projects come with setting goals. At the start of the e-Residency project the team set themselves the goal to reach 10 million e-Estonians in 2020. Korjus states it is not a ‘mandatory goal’ though. He tells over 17.000 e-Residents are registered, who together started over 2.000 companies. “In comparison: In Estonia are 30.000 companies listed. So even this is a huge number for our country”.

Growth by facilitating others through APIs

“However our speed, as government, is above average, we do understand very well that we’re always 10 times slower than the market,” tells Korjus. “With cases like the payment provider and digital identity we now cover 80 percent of the inhabitants needs. For the remaining 20% we’re building APIs in which others can create their own solutions. We currently offer two APIs. One can be used to integrate the ID card with a website to offer secure login and user authentication. The other is a more niche API that can be used by business service providers to register companies for e-residents in the Estonian business register.”

The population is proud. “Technology is almost seen as a religion here,” says Korjus. “In case you would ask an Estonian where he is from, he’ll answer: from the country that created Skype and Transferwise.”

The great international attention in the media about the e-Residency project definitely contributes to this pride and Estonia’s profile as important ICT-nation. Something on which marketing smartly utilizes. E.g. they invited the Britons after the outcome of the Brexit referendum to remain digital Europeans.

Kaspar: “Whenever you try to disrupt the status quo, in this case questioning the traditional notion of residency and citizenship, you run into problems. We have learned to be patient and to work through the big problems as they come, one at a time. Although our team is backed by the government, we approach our work with a lean startup mindset.”

“A study conducted by the American company Intuit suggests that there will be over 100 million new online workers by 2025. Through e-Residency, countries like Estonia will be in a position to attract people like this by becoming the best place to run a location independent business in the world. We think that countries will soon be competing for citizens, residents, and e-residents just like private companies compete for customers now.”

In a time that governments attribute more value to country borders than to entrepreneurs, I think Estonia has taken a unique and promising road. By making clear choices, facilitating others, and by simple doing, they achieved impressive results in a relatively short period. Will e-Residence be a success? I do give them a chance and just requested my e-Residency. Simply, because it is a beautiful project to be part of.

Food4thought: Country as a service?

April 1st, 2016, Estonia jokingly launched the website ‘ Country OS ’, where countries may get a ‘country as a service’ subscription. Maybe this sounds crazy, but when you read Ben Hammersley’s quote in this article in Wired, he might provoke you somehow: “In other words, a nation is now competing with its neighbours on the basis of the quality of its user interface. Just as you might switch your bank to one with a better mobile app, the Estonians hope you’ll switch your business to a country with an infrastructure that is easier to use.”

This blog was published in Dutch on Intrapreneur.nl

Video interviews about e-Estonia and e-Residence: