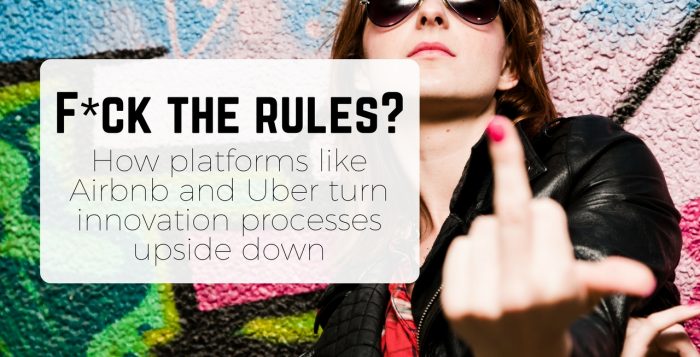 Bluntly ignoring the rules and realizing massive growth in the mean time, doesn’t sound like a very sustainable business formula. Yet this is what the loved ones of Silicon Valley like Airbnb begin to understand as well.

Platforms within the sharing economy seemed the ultimate solution to many. Needy landlords were able to cover their costs through Airbnb and tourists found a unique experience for an attractive price. But these platforms are negatively reported on ever more frequently. The relationships, having been constructive in some cases, are strained. What will the future bring? No one knows, but to contextualize the coverage of these developments, one has to understand how these platform’s strategies have been designed.

To many a man platforms like Uber and Airbnb are both a pearl as well as the excrescence of the so-called peer-2-peer platform economy, sometimes also titled sharing economy (although mostly unjustly). A ‘new’ economy in which consumers offer each other temporary access to their possessions and services through an online platform, whether or not for a charge. The transaction is facilitated by an online market place which, mostly build on smart technology and algorithms, lowers both side’s thresholds as far as possible in order to help users find and trust one another, and finalize the transaction.

Markets most open to the rise of these kinds of platforms are markets where the unease is the greatest at the consumer side of the deal. This unease is addressed and the platform consequently offers a far better consumer experience, oftentimes at a competitive rate. As early as 2014, Rachel Botsman, an Australian pioneer in the sharing economy, presented in her “areas ripe for disruption“, in which she chooses a consumer perspective to explain which markets are ‘ripe for disruption’ according to her opinion.

This picture aims at the end-user, but ultimately there has to be an interesting business case as well. In order to be attractive for entrepreneurs, a platform has to comply with these four criteria:

Take Uber in mind: in all larger cities taxis are a popular means of transport. People do pay more money for it, than for the use of public transport. There is no monopoly position and a taxi is a universal term. Hence, it isn’t surprising that Uber, with a market value of about 70 billion Dollar, is the figurehead of the potential of this platform economy.

Growing exponentially in the platform world can only be achieved if you fail to do certain things, and fail to take on certain responsibilities.

There is a good chance that these kinds of platform players show up in many more markets in the years to come. They aim at the markets where the the biggest improvements can be made, and where the most can be earned.

Because of the fact that market places facilitate, but don’t own or produce products or services, they are able to grow exponentially. This is what Airbnb has done over the last few years.

The success also has downside: by lowering the thresholds for short-term rentals, some cities are flooded by tourist. Investors have bought half streets to consequently rent out apartments illegally as hotels.

Exponential growth in the platform world can only be achieved by failing to do certain things, and failing to take on certain responsibilities. The fact that Airbnb doesn’t own the bricks, doesn’t mean the bricks don’t exist. Airbnb isn’t responsible for the accommodations, but the responsibility lies by the individual landlords.

The same applies to Uber, which is world’s largest taxi company without owning a car. But the cars are driving around, cause accidents and break down. In stead of a risk department determining the real risk and the financial department calculating the effective revenue per ride after, amongst others, deduction of taxes and depreciation, the full responsibility lies with the individual driver.

In the media, these platforms are either highly appraised or cursed. One thing is clear: this development will continue and it is therefore important to understand what strategy these platforms have and why they do what they do. As an expert in this field, I have gained important insights over the last couple of years. These are the four most important things you have to know in order to understand the real agenda and impact of these kind of platforms.

“If it didn’t exist before, it isn’t regulated. There are no laws.”

Entrepreneurs within the platform economy have, just like many other tech entrepreneurs, their ‘own’ view of the truth. Kees Koolen gave a presentation on ‘The Next Web 2016’. Koolen made Booking.com great, used to be the COO at Uber (until he found out that his capital could not be moved to the US easily) and at the moment he is busy building the largest farming company on earth. Bottom line: Koolen knows how to make something grow in a short time.

He says about regulations:

“When your doing something disruptive, it means it that you’re doing something that did not exist before. To me it is very simple. If it didn’t exist before, it is not regulated. There are no laws. So, by default it means that you are maybe not within the law. … If you are going to look at the law and think, I can’t do it, that is a pity for you, because your company won’t be big.”

One could describe Koolen as a barely self-critical cowboy entrepreneur. It is this blind conviction that gives these kind of entrepreneurs a completely different starting point, than what were used to from entrepreneurs until now. An attitude that might get one really far, but which is a disastrous attitude on the long run from a leadership point of view (including exemplary behavior). Because leadership also includes responsibility.

De conception ‘without laws, I can’t break the rules’ is also recognizable in several court cases against Uber and Airbnb all over the world. Some of the extremes being the continuation of the service Uber Pop in the Netherlands, although the judge had prohibited the service, and the Greyball affair in which Uber identified the accounts of inspectors with smart technology. These inspectors where shown a shadow app of Uber in which no taxi could be found anymore.

Such a platform enters the market with the conviction that it remains within the grey zone of the law.

According to prof. Koen Frenken (University of Utrecht) platforms like AirBnb and Uber turn the ‘normal innovation process’ upside down. He states:

“Traditionally, innovation is researched scientifically, followed by a normative discussion about its desirability, consequently politics comes up with regulations, and only then a new product or service will be launched.”

“Platforms like Airbnb have turned this process around. Companies launch their platform first, consequently a normative discussion follows, and then the scientific research is initiated.”

Such a platform enters the market with the conviction that is has entered in a grey zone of the law. By using smart marketing actions and a pleasant service, they usually know to quickly satisfy many clients. Enthusiast client are usually great ambassadors. They don’t only help to get the word out, but also come in action against parties that try to slow down the growth.

Recently, Airbnb openly requested its users to protest against the reporting obligations in Amsterdam, the Netherlands. With many supporters and some great stories the entrepreneur enters into the conversation with the government which, like we all know, doesn’t want to build a reputation as ‘innovation killer’.

The reason these platforms can keep this strategy up is because they don’t invest in the things that are being traded on the platform. They see themselves as a technology company, although Bruxelles is already of a different opinion.

Governmental request are only going to be more, never less. Of course, platforms aren’t eager to make any commitments.

It’s easy to call the entrepreneur the bad guy, and position the government as sluggish and prehistoric. But bare in mind that both parties simply don’t know what ideal cooperation looks like. Sometimes a platform changes along the way into something different. Uber started as a limousine service, but transitioned to ‘on demand mobility’ later on. The potential of the app became completely clear when founder Travis Kalanick had a meeting at Google and got in a self-driving car for the first time. From that moment on Uber dreams about a super efficient service with self-driving cars, without those cumbersome drivers.

But even when you have the model in mind in an early stage, it’s still a quest to find the right balance between meeting local regulations, revenue, and growth. This implies that they are looking for universal, easy implementable solutions. Every concession with a (local) government is the absolute minimum limit in the negotiations with the next. What is requested by a government is only going to be more, never less. Of course, platforms aren’t eager to make any commitments.

For example, Airbnb has agreed upon programming local regulations in certain cities into its platform. Surely, there could be better options, but don’t forget that it is almost impossible to legally ban a platform and that the huge challenge for the future lies in the growth of the number of platforms which don’t want to talk with (local) governments. Ultimately a platform of independent enforcement should be established.

Another challenge are local governments working with outdated or unorganized data. From government perspective, there is a huge challenge to connect with the digital outside world to construct a workable cooperation.

The term ‘disruptor’ or ‘innovator’ is a temporary cover under which one can achieve a lot, but ultimately one has to grow up.

The ‘prehistoric’ speed of the government has an advantage: it provides time to see a development grow, so no hurried decisions are taken, and no energy is lost to developments that fade away within a few months.

Even without obstacles from government side the growth curve of a platform like Airbnb will weaken over time. The number of houses and tourist is limited in the end, limiting growth on the long run. Though, this won’t keep entrepreneurs from entering new markets when they see possibilities.

Did you ever meet a business that has offered the same service or product for 20 years and is still disruptive? I don’t. Like Koolen  stated earlier on, ‘disruption’ is always of temporary nature. Ultimately someone overtakes you, or jour plans are embedded in the society. The term ‘disruptor’ or ‘innovator’ is a temporary cover under which you can achieve a lot, but ultimately you have to grow up.

When you grow out of you cover and leave it behind, your company has not become pious at once and still can’t be trusted blindly. Trust is important, unless it veers to naivety.

Not only platforms, but also governments and society will have to face their challenges. With the growing number of platforms, it is impossible to make agreements with all platforms. Banning a platform is impossible given the current juridical boundaries and enforcement through users is very laborious without the platform’s data.

It’s time for urgency within governments to draw up a vision and a policy in the areas of digitalization and the platform economy. These developments can only be directed well, if one understands what is currently going on and what the future has in store, has organized his own affairs, and knows his position in the ecosystem. It wasn’t without reason that the Rathenau Institute recently published the report ‘Sharing economy puts public values under pressure‘.

And, when nothing happens? The rise of platforms will be an even greater challenge for everyone, in order to create a workable solution and a (societal) desirable environment.

Video registration of the symposium “Advancing Research into the Sharing Economy”