CLOSE
Home Project updates Am I still allowed to make mistakes? The future and dilemmas of... 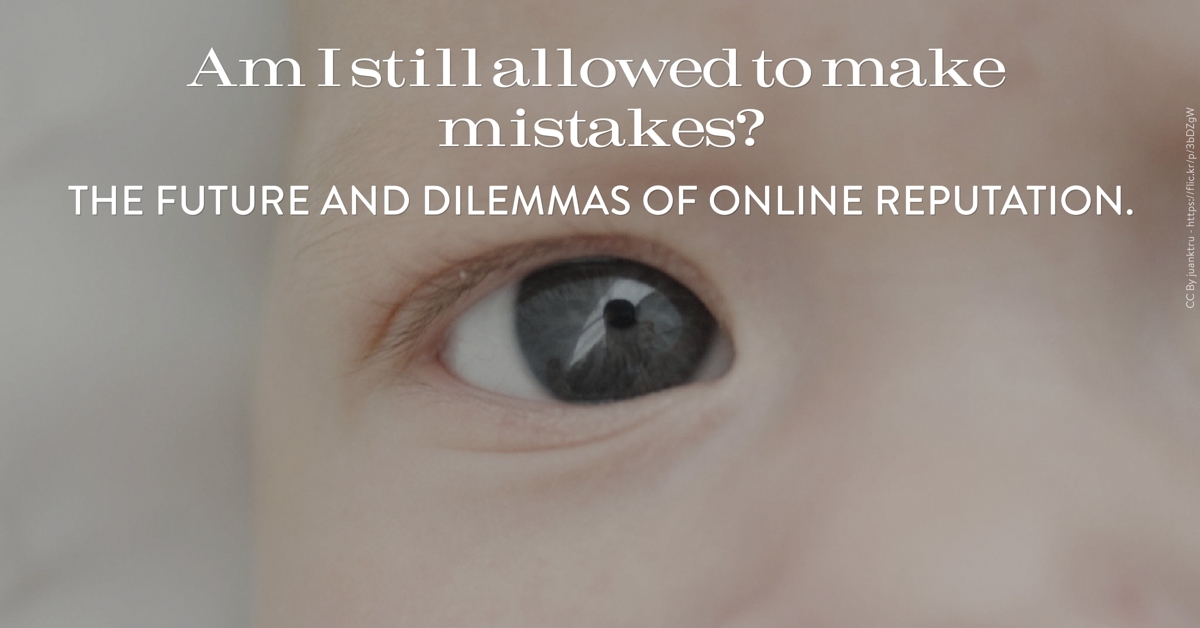 What importance might be assigned to online reputation? More and more people make use of online market spaces in order to trade with strangers. You may rent out their house on Airbnb, join a private driver through Uber, or invest in a cool gadget in a Kickstarter campaign. It’s really exciting, for anyone and everyone is basically anonymous on the internet. So, you’re in the blue if you can trust the person in advance. Over time, these market spaces have developed countless ways to generate trust.

Systems will ask for ID-checks, Facebook connects and connections with other trusted sources. This is the only beginning. After every transaction, demand and supply side are requested to evaluate each other. How did you enjoy your stay in this home? How clean was the guest? Most often indicated by a short descriptive review or a star-based rating.

Seemingly, these platforms deem these evaluations and checks not yet sufficient. Uber, in this context, announced recently to start using gps-data of driver’s cell phones in order to monitor the driving skills and to intervene if needed. Kroodle, an initiative of Dutch insurer Aegon, launched a very similar product. The calmer you drive, the higher the reduction on your car insurance at the end of the month. This is the first tug pulling the rug from under the collectivity principle on which insurances are based. So far it is only a reduction, but we can figure it is just the beginning.

Reputation and valuation systems will be used more extensively. They are applied in a wider scope and databases –data originating from apps, but also connection to bank account, profiles and friend’s behavior– are being connected. The more information one gathers, the clearer the user profile. With such a personal profile, bad behavior can be punished with exclusion and good behavior awarded with greater access and privileges. Transparency in conduct fails, desired behavior is stimulated, being left out once is just a bummer. And all this is becoming even easier with automated algorithms.

Systems in use nowadays are still in an early phase. With scores of 4 out of 5 stars you could think to be heading in the right direction. On Uber, however, having less than 4.6 stars already puts you in the penalty box. Even though the driver has no complete control over the customers experience. Bad weather, traffic jams, accidents, or problems with the app do have a direct influence on the final grade. Besides this, the frugal Dutch will probably give a lower average than the jovial Americans. In case a customer regrets the low rating he gave the next day, there is no way to correct oneself.

The better and completer the online reputation, the greater the chances for an Uber driver to find work. This reputation is composed of evaluations of small assignments. An Uber driver will be evaluated about twenty times a day. Off course everyone will attempt a maximized customer experience, but ask yourself what effect it will have on the person itself. The constant push to please somebody, avoiding every little mistake, and adapting your behavior to the standard Uber tries to establish, leaves no space to experiment. Deviant behavior is most probable to be punished, resulting in exclusion. I don’t know about you, but such would drive me totally insane.

Who determines what is ‘right’?

Earlier on I indicated that these systems aren’t perfect. Not only the techniques, but also the interpretation of what is ‘good’ and what is ‘bad’ is on the line. This in turn is situationally linked. Whenever I’m taking an Uber ride in company of my kids, I like the driver to drive calmly, yet when I’m in a rush to catch my flight, I’d be pleased with a racy driving style. In both cases the gps-algorithms are likely to punish the driver –as he would be either far too slow, or far too speedy. Though, I would be a super content customer. In hiring a cleaning lady through a mediator platform like Helping the same dilemmas are faced. What makes a cleaning lady good? One greatly values punctuality, another cleaning abilities, and a third a friendly chat.

How important is trust?

Platforms claim that the creation and monitoring of trust is one of their main added values. The question arises: Isn’t the importance of online reputation too exaggerated. Ratings are based on rational data, although the human being can’t make rational decisions. I buy a house for more than the asking price, mainly based on gut feeling, but leave my most precious possession –my kids– at home with a relatively unknown, when going out for diner with my girlfriend at night. The platforms make us believe that online trust is very important, see this short fragment.

They have an incentive as well: the fact that you won’t trust a stranger right away –distrust being the standard– has a huge impact on their right of existence. What would happen if we would switch the standard to ‘trust’?

It is important to ask ourselves this question. As mentioned before, reputation systems will be used for so many more applications. These may be good, but also be bad or with disputable objectives.

Reputation data helps entrepreneurs without credit history in less developed countries to obtain loans. But things may turn. Considering the possibilities, one would end up in the scenarios described in the book The Circle, by Dave Eggers. Reality has caught up with the writer’s fantasy, so it seems. Late December last year, it was announced that China is developing a national reputation score, Sesame Credit. Drenched in clever gamification techniques, the score is still optional, yet will be mandatory for all it’s population from 2020. The Independent unraveled the system, stating “The system measures how obediently citizens follow the party line, pulling data from social networks and online purchase histories.” (China has made obedience to the state a game) Bringing a scenario depicted in The Circle within reach.

Consequently, the time has come to consider future reputation systems. Anyone who owns reputation data is sitting on a goldmine, and even owns the solution to glue platforms together. The interpretation of data will hence never be fully objective, but always in advantage of the (revenue) model of the platform.

Everyone has to learn from their own mistakes. The current systems do not allow for this, so we will have to think about creating a system that takes into account the human development on the long run. A system with room for mistakes, where you do have the right to experiment, and where shortcomings can be forgotten. For otherwise we’ll end up in a situation in which deviant behavior, which has been a source of new inventions through the ages and brought growth to the human existence, will be hampered.

Video registration of the symposium “Advancing Research into the Sharing Economy”