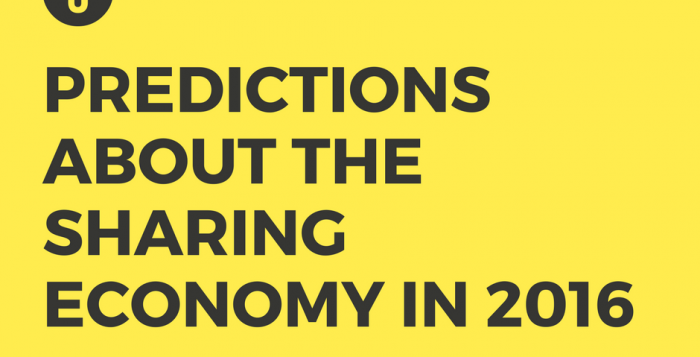 The sharing economy is an incubator for companies with exponentially growing valuations and user numbers. Hence the number of fascinating confrontations with the status quo also grew in 2015. What what will 2016 have up its sleeve? Sharing economy expert Martijn Arets looks ahead.

1. ‘Traditional’ Tech companies take the step into the sharing economy

Though the sharing economy domain was dominated by national and international start- and scale-ups in 2015, 2016 will also see some well-known ‘traditional’ names joining the sharing economy. Existing corporates are recovering from their disruption and discover the fact that they can earn their share in these developments. Better said: they have to rediscover themselves to be relevant in the future.

The automotive industry will, like in 2015, take the lead. Logically: the development of self-driving cars provides the branch the urgency to innovate. In this perspective, BMW launched a car sharing platform for her clients, Toyota launched a car rental service for Uber-drivers, and Daimler expanded its Car2Go program.

The circa 150 sharing economy platforms active in the Netherlands at the time, will receive solid competition this year. Foreign players are crossing the border and free open source platform software like Sharetribe lowers the threshold to launch new ideas better than ever.

Given that a critical mass remains one of the greatest challenges to make a sharing economy platform a success, I also expect online platforms with an existing user base, like Google, Facebook, and Waze, to enter this domain. Google has been investing in several different initiatives and has a look in the kitchen in many places.

Recently, Facebook requested a patent that might indicate the company wants to integrate a drive sharing function. In Israel, Waze experiments with the drive sharing app RideWith to potentially compete the French BlaBlaCar.

3. Growth through partners and APIs

As many platforms mainly tried to attract users to their website in 2015, 2016’s (necessary) growth will mainly come through opening the platform for other parties, commonly by inserting APIs. Uber does this most actively, as far as I can see. Especially when they will start facilitating package delivery in the Netherlands, this might in effect provide an enormous growth.

After a residence (Airbnb), and a car (Uber and SnappCar), it’s your skill that is the most valuable and sellable asset. This year platforms offering small tasks, nicknamed ‘gigs’, will rapidly boost. Delivering groceries, walking the dog, cleaning, small domestic tasks, etc.

All this might go for a few euros and can be arranged for within seconds through a smart app. With the growth of these type of platforms, mostly inhabited by low-skilled workers with less alternatives to work different jobs, the discussion about this new form of ‘labour’ will rise.

5. The market will mature

With the valuation of many millions up to even billions, many platforms won’t be able to hide behind their label ‘disruptive’ and have to take responsibility for their actions. Differently stated: the market will mature.

In 2016 the term sharing economy, which resembles the phenomenon of people allowing each other to use their unused consumer products for a while (Frenken and Meelen, 2014), will be exchanged for a better fitting ‘collaborative economy’.